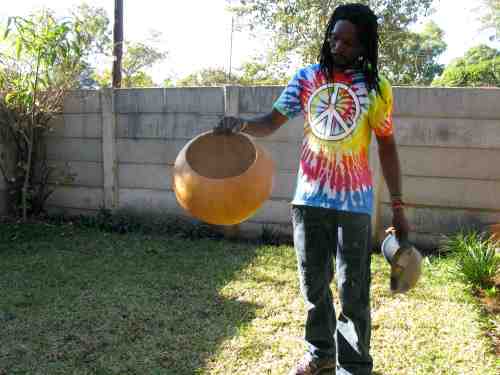 I recorded both sessions in one day. I set up a session with Sly at his house in the Chinotimba township of Victoria Falls. King George I recorded live at the Boma.

Sly’s music takes you away very quickly. Within moments of listening you are no longer hearing the music, the sound, his finger and thumbs playing the iron keys, the quiet sound amplified out through a calabash constructed from a pumpkin – your thoughts are faraway. King George’s music on the other hand makes one feel very present – so much energy, singing, dancing, shaking, shouting, drumming, animal calls and clapping.

Speaking with Sly and King George throughout the day, it became quickly obvious that musicians there have a hard time. With thousands of people going to see the Falls every week, there is a small and booming tourism economy there. Money is being paid hand over fist to tour operators, travel agents, safari lodges and camps. Life is expensive – Sly was selling one of his mbira to pay for his water bill. Musicians receive almost nothing from their employers, relying instead on tips. In this particular establishment though (the Boma), the musicians had been stopped from walking around with a collection basket at the end of their performances, for fear they would scare the patronage away. Instead they play for a meal at the restaurant every night, and any tips they might be lucky enough to receive. Mainly they continue playing every night to keep the culture alive, and to share it with the people.

Read more about what happened that day by clicking here ☮

For an overview of mbira, and its importance within Shona culture and ceremonies check out this mbira page